Cannabis (Cannabis sativa L. – hemp) is one of the oldest cultivated plants purported to have unique medicinal properties. Due to dozens of bioactive compounds found in hemp, it is sometimes called as The Plant of the Thousand and One Molecules [1]. It has been proven that health-promoting and therapeutic properties of hemp are due to its phenolic compounds bonded with terpene moieties – cannabinoids, which bind to numerous receptors in the body, including endocannabinoid CB1 and CB2 receptors.

To date, more than 120 different cannabinoids have been identified in cannabis [2, 3]. The most abundant and most active cannabinoid of hemp is cannabidiol (CBD). CBD, unlike the another well-known cannabinoid of hemp tetrahydrocannabinol (Δ9-THC) does not have intoxicating properties. CBD exhibits broad spectrum of biological activities including anti-inflammatory, anti-oxidative and anti-necrotic protective effects [4].

There is evidence that CBD could be exploited in the treatment and symptom relief of various neurological disorders such as epilepsy and seizures [5, 6] psychosis [7], anxiety [8], movement disorders (e.g., Huntington’s disease and amyotrophic lateral sclerosis) [9, 10], and multiple sclerosis [11, 12]. CBD was also being used in clinical trials in Parkinson’s disease, Crohn’s disease and schizophrenia [13-15] showing promising results in these disorders [4]. In 2018 the Food and Drug Administration (FDA) has approved Epidiolex® – pure CBD for the treatment of severe, orphan, early-onset refractory epilepsy syndromes, which significantly reduces seizure frequency. Recent studies have also shown that CBD can be used as a potential preventive agent in the early stages of SARS-CoV-2 infection. CBD and its metabolite 7-OH-CBD, block the replication of SARS-CoV-2 in lung epithelial cells thus inhibiting its multiplication [16]. 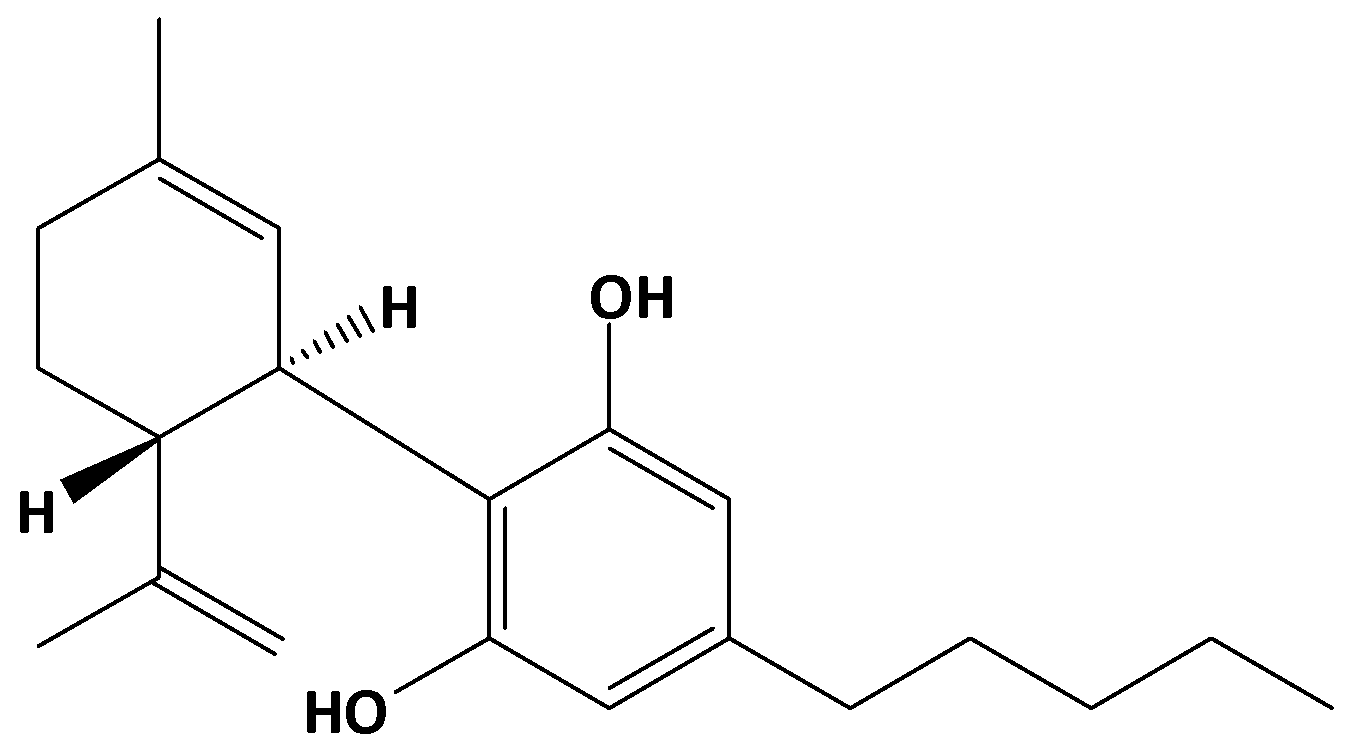 There are many ways to administer medicines such as injections or inhalations but the most common is oral administration which in comparison to intravenous or inhaled administration is not invasive and does not cause throat irritation or coughing. However, very often the high therapeutic potential of drugs administered orally is severely limited due to its low bioavailability, which is mainly caused by poor water solubility and therefore absorption from the gastrointestinal tract.

Therefore, one of the fundamental challenges associated with the use of CBD in treatment is to maximise the absorption of orally ingested CBD. One of useful tool to increase stability and bioavailability of poorly water-soluble compounds as CBD is use a formulation composed of lipids, surfactants and cosurfactants. If the composition is able to form a fine emulsion (micro/nano) in an aqueous environment e.g. gastrointestinal tract, the bioactive compound can be readily absorbed through the lymphatic pathway bypassing the first-pass effect of the liver thus bioavailability of drug is significantly increased. We would like to present a novel composition AdvanDrop® with CBD that notably increases and accelerates the absorption of this bioactive cannabinoid from the digestive system.

To measure the parameters of nanodroplets formed by dispersing AdvD M10 (10% CBD), 100 mg of the formulation containing 10 mg CBD was dropped into 350 ml of distilled water and gently stirred with a magnetic stirrer (250 rpm, 30 sec, IKA, Staufen im Breisgau, Germany).

Male rats (Sprague Dawley, Charles River Laboratories, Germany) aged 7-8 weeks, weighting between 174-276 g were housed in individually ventilated (IVC)-cages in groups of two rats. The cages were provided with aspen bedding (4HP and PM90L, Tapvei, Estonia) and paper strands (Sizzlenest, Datesand, UK or EnviroPak with Sizzlenest, Datesand or Bed r’nest, Datesand) as nesting material, and red polycarbonate cylinder (Datesand, UK) and aspen brick (M-bricks, Tapvei, Estonia) as cage enrichment. The temperature (22±2˚C), humidity (55±10 %) and air exchange rate (75 times/h) of the IVC-cages and 12/12-h light/dark cycle (500 lux lighting on at 6 a.m., 1.5 lux lighting on at 6 p.m.) of the animal holding room were automatically controlled and maintained. Animals were allowed to acclimatize to the site for at least five days prior to the study. Animals had ad libitum access to food (SDS diets, RM1 (E) 801002, Special Diets Services, UK) and tap water at all times, and their welfare was assured with daily observations.

Pharmacokinetic experiment:Experiment using AdvD M10 and CBD in MCT oil ware conducted in 4 replicates, whereas control (blank without CBD) in triplicates. Each animal was given a dose of 12 mg CBD / kg body weight from a stock solution of: dispersed AdvD M10 formulation in water at 7.33 mg/g or stock solution of CBD in MCT at 105 mg/g. A 1 ml syringe fitted with an 18 G ball point feeding needle was used to administer the material into the stomach. Blood samples were collected to K2EDTA tubes by saphenous venepuncture prior to dosage (0 min) and at 0.083, 0.25, 0.5, 1.0, 1.5, 2.0, 4.0, 6.0, 8.0 and 24.0 hours thereafter. Within 30 min following the sampling, the blood was centrifuged for plasma separation (room temperature; 10 min; 2700g). The plasma samples were transferred into plastic tubes, frozen and stored at -20˚C until analysis. Clinical signs and general behaviour of the animals were recorded when necessary, as was any deviation from the study plan.

The plasma samples were prepared for analysis by mixing 30 µL of plasma sample with 30 µl of PBS after mixing, 240 µL of internal standard solution (20 ng/ml of ethinylestradiol in acetonitrile + 1% formic acid) and mixed. The samples were centrifuged (20 min; 2300g) and 250 µl of supernatant was transferred to Waters Ostro 96-well plate and pushed through the plate with Waters Positive Pressure processor and submitted to LC-MS analysis.

The LC–MS/MS system was composed of a Waters Acquity UPLC + Waters TQ-XS triple quadrupole mass spectrometer equipped with an UniSpray (US) Ionization source. Data acquisition was performed with MassLynx 4.2 software. 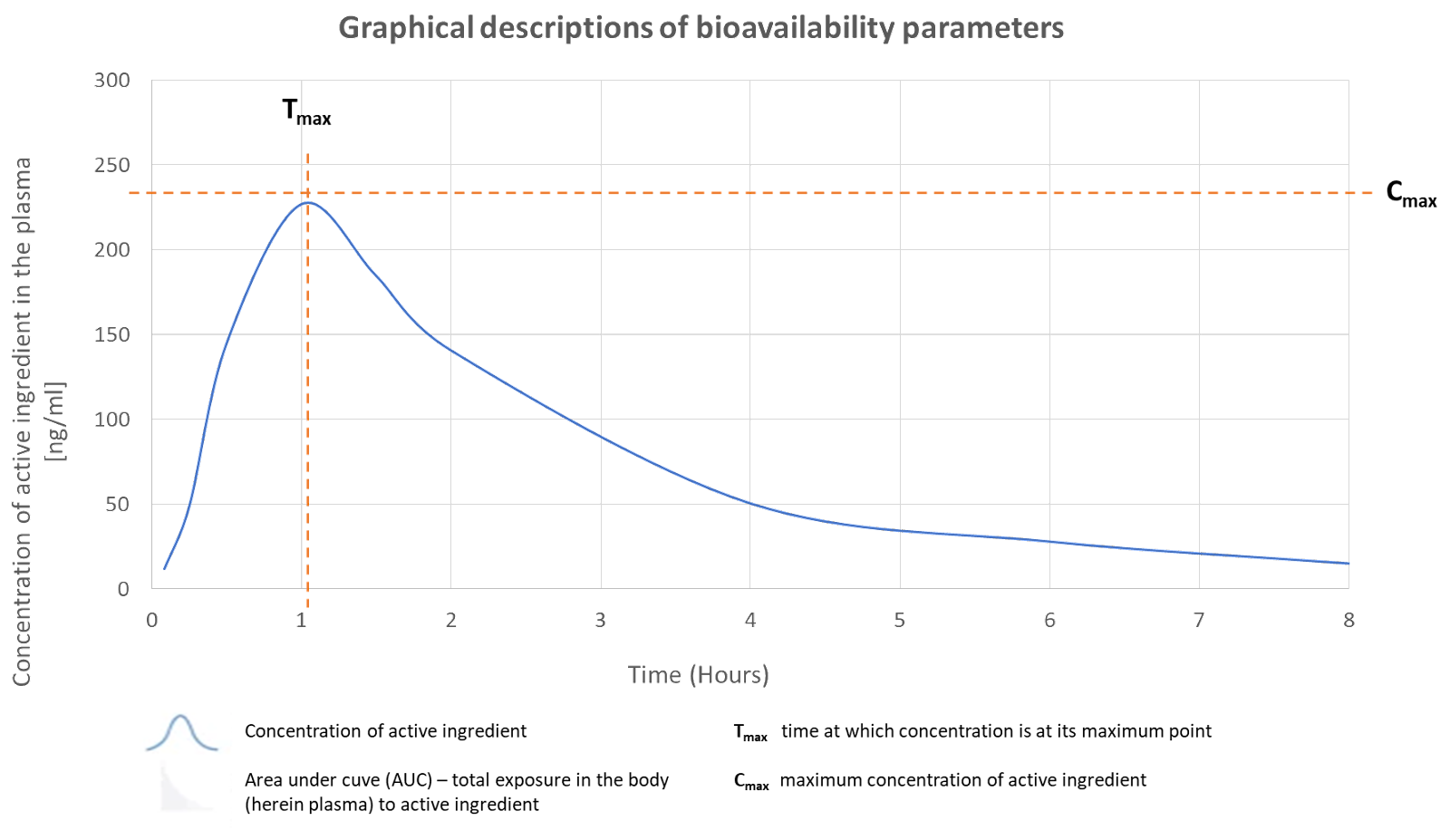 The pharmacokinetic parameters were calculated using Phoenix 64 (Build 6.4.0.768) WinNonlin (version 6.4) software, using non-compartmental methods (NCA). Nominal doses were used for all animals. The terminal phase half-life (T1/2) was calculated by least-squares regression analysis of the terminal linear part of the log concentration–time curve. The area under the plasma concentration–time curve (AUC) was determined with the linear trapezoidal rule for increasing values and log trapezoidal rule for decreasing values up to the last measurable concentration (AUC0-last), and extrapolation of the terminal elimination phase to infinity was used when possible to obtain AUC0-infinity; the following criteria were considered:

Like many lipophilic compounds, the oral bioavailability of CBD is known to be poor due to its  limited absorption caused by very low water solubility and extensive first-pass metabolism [4, 17]. Studies in dogs have showed that 74% of CBD is metabolized in the liver [18]. The most popular oral CBD products on market are CBD oils, which are hemp CBD extracts (full or broad spectrum) or pure CBD isolate suspended in MCT oil (medium chain triglycerides), sesame oil or hemp oil. The use of CBD in these forms, due to its low bioavailability, can cause difficulties in achieving the desired therapeutic response through oral administration of CBD. Moreover, the oily form of these products, which are instilled sublingually, makes ingestion and dosage difficult. Therefore, new formulations that would enhance the absorption of lipophilic drugs such as CBD and unlike CBD oils, also be consumer-friendly are increasingly being sought. The novel formulation which notably increases and accelerates the absorption of CBD from the digestive system is AdvanDrop® (AdvD M10).

Among of dozens combination of composition consisting of API (different cannabinoids including e.g.: CBD, CBC, CBG, CBN, Δ9-THC, Δ8-THC, CBDV, CBL, acidic forms of cannabinoids: CBDA, THCA, CBGA, mixtures of cannabinoids as well as hemp extracts), lipids, surfactants, cosurfactants and cosolvents 68 formulation were tested, whereas for further tests AdvanDrop® AdvD M10 formulation was chosen. AdvD M10, developed using the DOE (Design of Experiment) method, showed the best parameters of nanodrops regardless of the cannabinoids used. In addition, the ingredients used in the AdvD M10 formulation are approved for the food industry in EU and US.  AdvD M10 with CBD formed nanodroplets with a low dispersion rate – less than 3 seconds, hydrodynamic diameter DH = 36.4 nm ± 0.26 nm, polydispersity index PDI = 0.143 ± 0.003 and transparency %T = 98,7% ± 0.17%. Moreover nanodroplets obtained from AdvD M10 were stable and had desired parameters (small hydrodynamic diameter, monodispersity, high dilution resistance in aqueous environment )  in a wide range of pH from pH=8 to pH < 2.  That  makes the formulation AdvD M10 the perfect candidate for pharmacokinetics studies.

Pharmacokinetics of water solution of dispersed AdvD M10 with CBD concentration 10.510% as well as CBD oil (CBD 10.498% dissolved in MCT oil) as a control was tested in-vivo. Oral administration of CBD in formulation AdvD M10 and the oil-based formulation (CBD in MCT oil) in rats resulted in the pharmacokinetics profiles depicted in Figure 2. 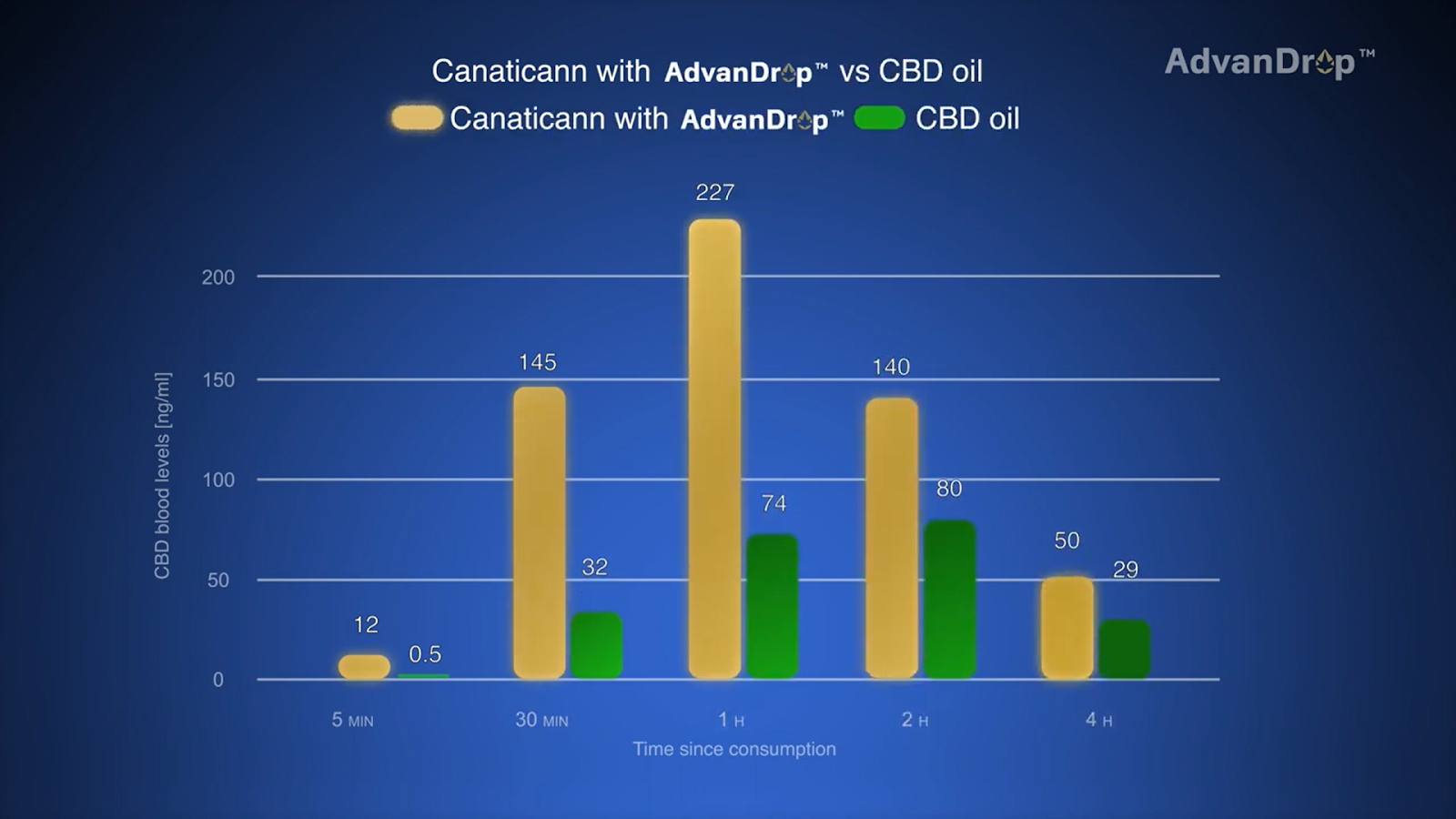 Figure 2. Mean plasma concentration versus time curves for CBD administered in the AdvanDrop® formulation in comparison to CBD in MCT formulation.Table 1. Measured concentrations of CBD in rat plasma after oral administration at 12 mg/kg.

The calculated pharmacokinetic parameters for CBD in rat plasma after oral administration of AdvanDrop® formulation and CBD in MCT oil formulation at both nominal CBD doses of 12 mg/kg are reported in Table 2.

Table 2. The calculated pharmacokinetic parameters for CBD in rat plasma of tested formulations.

Administration of CBD in the AdvD M10 formulation resulted in the much higher Cmax(241 ± 71.7 ug/mL), while in case of CBD in MCT oil the Cmax was significantly lower (123 ± 60.3 ug/ml). Moreover, the concentration of CBD in plasma, 5 minutes after administration from AdvD M10 composition was 11.7 ± 1.72 ng/ml whereas from MCT oil formulation that was only 0.45 ± 0.29 ng/ml (over 26-fold lower). This result strongly indicates that CBD derived from AdvD M10 is rapidly absorbed. Maximum plasma CBD concentrations was observed slightly faster in case CBD in AdvD M10 (Tmax =1.25 ± 0.29 h), CBD from MCT oil formulation required a longer time to reach Cmax (1.5 ± 0.41 h). Area under the curve (AUC) which describes the variation of a drug concentration in blood plasma as a function of time in both cases (AUC0−lastand AUC0−infinity) showed without any doubts that administration of CBD in AdvanDrop® formulation (AdvD M10) improved the systemic exposure to CBD almost 2-fold compared to CBD in MCT oil formulation.

To sum-up, the AdvanDrop® is novel technology that notably increase bioavailability and bioeffectiveness of CBD by forming stable nanodroplets with CBD in an aqueous solutions. Due to the fact that the formulation was made of ingredients approved for food AdvanDrop® with CBD might be dissolved with water or any other beverage and consume in much more consumer friendly way than usage of oily CBD products. In comparison to traditional CBD product – CBD in MCT oil, AdvanDrop® technology provides at least 2-fold higher systemic exposure to CBD and very fast onset of action (concentration of CBD 5 minutes after oral administration is 26- fold higher in comparison to CBD in MCT oil).

Because the onset of action has fundamental importance in disorders such as epilepsy, severe pain, or anxiety, where CBD is often used as a medicine and must act immediately after administration, there is great potential of using the AdvanDrop® technology also as a carrier for CBD in therapies where a short onset of action is crucial.

Funding: The Smart Growth Operational Programme 2014-2020, Priority I: Support for R&D works by enterprises, Measure 1.3: Research and development works financed with the participation of capital funds, Sub-measure 1.3.1: Support for R&D projects in the pre-seed phase by proof of concept funds – BRIdge Alfa.